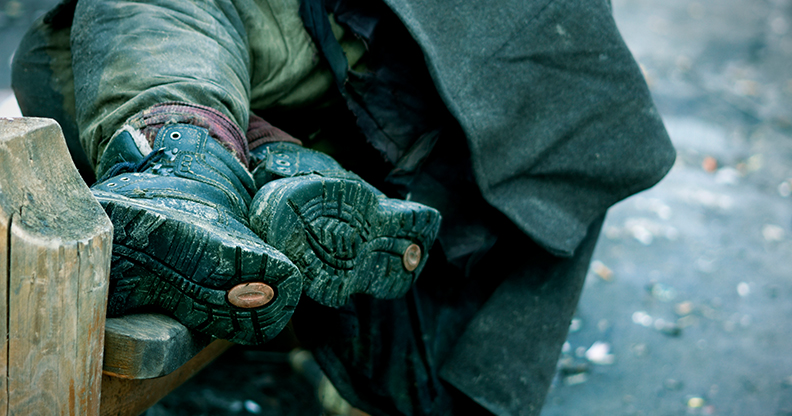 People experiencing homelessness are being hit hard by the 5th COVID wave sweeping through Greater Montreal due to the Omicron variant. Workers on the ground estimate there were at least 500 positive cases at shelters in the first two weeks of January alone.

The City of Montreal requisitioned the Hôtel Chrome in downtown Montreal and the Stade de soccer de Montréal in Villeray–Saint-Michel–Parc-Extension to house homeless people who test positive for COVID. Both facilities have 470 beds in a protected area to limit the spread of the virus in shelters. This is in addition to over 1,000 more beds set up to cope with the deep cold snaps of January and February.

Winter weather, the pandemic, and a significant increase in the homeless population combined with a labour shortage, a lack of housing, and a deterioration in the mental health of people in a situation of homelessness means this community is experiencing a “perfect storm” that must be faced by multiple partners. Thanks to its knowledge of homelessness issues, Centraide is one partner adding its voice to help address these problems.

Twice as many people experiencing homelessness

Since the start of the pandemic, the number of people experiencing homelessness has increased. Quick visits to Milton Park in the Plateau or even to the Old Port are enough to see how urgent things are, and that’s not counting areas near downtown where homelessness is on the rise.

In Villeray, the new Refuge du cœur de l’île, managed by PACT de rue, has been full since it opened in November. Every day, this shelter in Montreal’s north end takes in fifty people in an area where homelessness was almost invisible not too long ago.

The same phenomenon has been observed in the West Island and Le Sud-Ouest, as well as in Longueuil and Laval, where staff at shelters and warming centres are in short supply.

Workers in the field estimate that the number of homeless people in Montreal alone has doubled from 3,000 to 6,000 in the past two years.

“People say that no one is safe from an episode of major depression or from losing their home for some reason. While that can be true, people in a situation of homelessness generally have extensive past experiences with discrimination or violence. Homelessness is really a failure of our social safety net.”

The increase in homelessness among Indigenous people is of particular concern. Historical trauma, a loss of roots and cultural identity, personal hardship, racism, discrimination, dependency, violence, and poverty are all factors that can lead these individuals to the street. Indigenous homeless people are more likely to be found downtown near Cabot Square and in Milton Park in the Plateau, while more and more are making their way to the areas around the Mont-Royal metro.

Many factors explain the increase in Indigenous people in cities. They come looking for jobs, education, and access to health care and, unfortunately, are sometimes fleeing a difficult situation or living conditions.

Our new partners in homelessness include four community agencies that adapt their services to the specific needs of Indigenous communities.

A part of diverse Indigenous communities, these four agencies have staff who work with their peers in a situation of homelessness. They help clients navigate the health care system or refer them to community agencies. This psychosocial intervention approach developed “by and for” Indigenous people is affiliated with the Doctors of the World mobile clinic. For a few years now, this clinic has been travelling through the streets and parks of Montreal and stopping at shelters to provide primary care to the homeless.

An open door for the homeless, a window onto the neighbourhood

In the heart of Milton Park, The Open Door offers food and clothing, a laundry service, a daytime warming centre, listening services, assistance, referrals to mental health and addiction services, as well as housing and employment support.  Half of the people who visit the agency are Inuit, a group that is particularly vulnerable. The Open Door staff are also involved with a social mediation project to help neighbourhood residents get along better with the homeless population.

For nearly 20 years, Projets autochtones du Québec (PAQ) has operated a shelter and transitional housing specifically for Indigenous men and women in downtown Montreal in addition to providing psychosocial services and employability programs. At the height of the health crisis, PAQ opened a second shelter that is “low threshold,” meaning that it takes in people who have used drugs or alcohol, which is generally not allowed at traditional shelters.

Another low-threshold facility downtown is the St. Michael’s Mission day shelter, which provides hot meals, emergency food, clothing, and psychological support to Indigenous men and women in a situation of homelessness and to people in housing but who are vulnerable, such as seniors, women experiencing violence, and immigrants, including refugees.

Beyond downtown: The importance of social mediation

In downtown-adjacent neighbourhoods, where homelessness is a growing and sometimes new phenomenon, local inhabitants and business owners can have a hard time coping with the presence of homeless residents. Whenever a shelter or warming centre opens, community agencies are forced to deal with the population’s concerns

A homelessness support network in the Plateau

In the Plateau, the Plein Milieu agency, which has received Centraide support for all of its services for over 20 years, launched the L’Oranger project, a support network for people experiencing homelessness that creates connections between all members of the community. Neighbourhood business owners are asked to welcome homeless people by providing at least two free services, which could include washroom access; water bottle refills; Wi-Fi access; phone charging; or the chance to cool off, rest, warm up, heat up a meal, or do some paid work. Residents are encouraged to connect with homeless people by frequenting these businesses. Social mediators are there to facilitate communication between everyone.

A social mediator dedicated to homelessness in Le Sud-Ouest

Active for over thirty years in Montreal’s Le Sud-Ouest neighbourhoods, Prévention Sud-Ouest, known for its expertise in urban safety and social cohabitation, deploys a team of social mediators in the field. In spring 2021, a social mediator joined the team specifically to work on homelessness and cohabitation issues. Through awareness activities, the team defuses conflicts and promotes positive relationships between residents who have a home and those who do not.

“We often wonder where exactly it’s okay for people to experience homelessness. They can’t be in parks after a certain time. They can’t lie down on benches. They’re too disruptive when they gather in one place. We don’t want them at the entrances of businesses. (…) We don’t want to see them and we don’t want them to exist. But they have to exist somewhere.”

Since the start of the pandemic, Centraide has been working with its community partners to provide solutions in light of the emergency. Centraide has also financially participated in the collective effort launched by the CIUSSS du Centre-Sud-de-l’Île-de-Montréal and the City of Montreal.

At the worst of the health crisis, Centraide helped with the set-up of outdoor day shelters and drop-in centres in the downtown area and adjacent neighbourhoods, including one at the Port of Montreal’s Grand Quay.

During winter 2021, in response to new needs, Centraide supported day and night warming centres in downtown-adjacent neighbourhoods and even those off the island of Montreal on the South Shore and in Laval.

Again in December 2021, thanks to surplus funding from its 2020 annual campaign, Centraide strengthened its actions to help people experiencing homelessness through financial support for twelve new homelessness projects and agencies in addition to those to which it already provides recurring support.

Twelve new projects and agencies in the area of homelessness:

Acting on many fronts

Homelessness is a complex issue that must be tackled on many fronts: upstream, before the street becomes the only option; midstream, to urgently help people already on the street; and downstream, for people getting off the street.

Supporting young people and their families, breaking social isolation, connecting with the marginalized through street outreach work, and improving the housing supply are just some actions Centraide will support in the coming months.