Building the future
over nearly 50 years of history

Centraide of Greater Montreal stems from a group of charitable agencies that served different sectors of our community. It is the proud heir to a long tradition of community service.

The Federated Appeal of Greater Montreal was formed from the union of five federations that raised funds for distribution to social and community agencies in the dioceses of Montreal and Saint-Jean.

At the request of donor businesses, the objective was to hold a single annual fundraising campaign in order to:

The first united campaign launched on April 2, 1968, at Place Ville-Marie under the chairmanship of Jean Drapeau. It raised $9 million.

After working together for a few years, the federations decided to turn all their activities over to the Federated Appeal of Greater Montreal. In addition to conducting the annual fundraising campaign, the Federated Appeal would now distribute the proceeds as well. An agreement formalizing this arrangement was signed on September 25, 1974, the day that the organization now known as Centraide of Greater Montreal was born.

On May 10, 1975, the Federated Appeal of Greater Montreal changed its name to Centraide Montreal, and the annual fundraising campaign moved from the spring to the fall.

In 1992, Centraide Montreal was renamed Centraide of Greater Montreal to better reflect the extent of its territorial coverage.

In 2000, the report Building Caring Communities and Supporting their Ability to Act was produced by Centraide and issued by Chantier sur les enjeux sociaux. The report’s research on social contexts, issues, and strategies was promoted by Centraide over the following years.

In 2003, Giving in Solidarity to Build Caring Communities, a policy paper on philanthropy, was published.

Between 2009 and 2010, Centraide reexamined its social orientations and investigated philanthropic issues and courses of action, resulting in two strategic publications that would guide the organization over the following years:

There are times in an organization’s history when important questions are raised about its future. Centraide of Greater Montreal is experiencing one of those moments. This book first describes Centraide’s history and its accomplishments in order to provide context for the major crisis that this tension represents for philanthropic action and community solidarity in Montreal.

Available in paperback and digital formats. 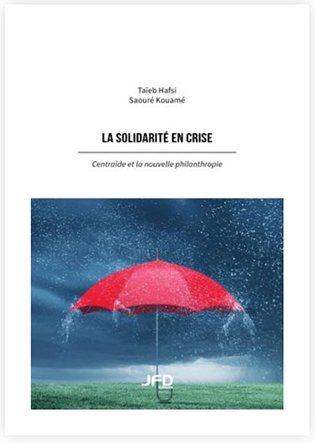