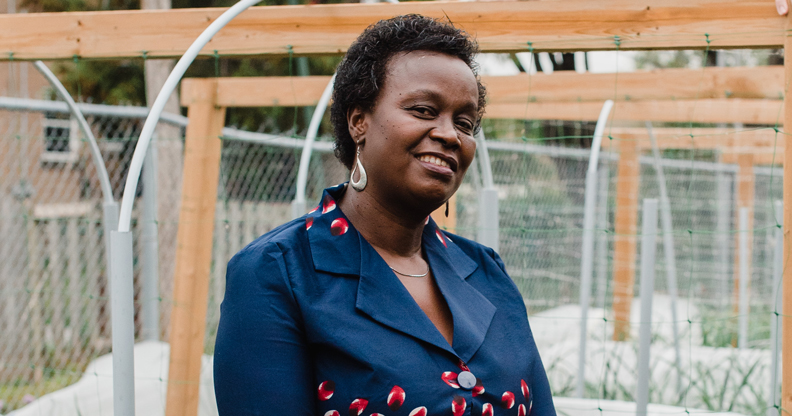 As a female politician, Gloriose was forced to flee her home in Burundi as it plunged into crisis. When she arrived in Lachine district, the Comité de vie de quartier Duff-Court (COVIQ) offered her food assistance, psychosocial support, and even a job!

“My name is Gloriose. I’m originally from Burundi in East Africa, which is bordered by Rwanda, Tanzania, and Kenya. I love Burundi and gave so much to the country. I worked as a math teacher before joining the government. I had several roles, including vice president of the National Assembly of Burundi and principal advisor at the Burundi Embassy in Egypt.

Unfortunately, like many African countries, Burundi is ravaged by war. Since 2015, my country has been in a political crisis. As a member of a political party, I was persecuted, pursued, and accused. My colleagues and friends were subject to torture and violence, so I had no choice but to flee.

I’m so grateful to the government of Canada for welcoming me with open arms. I was taken care of from the day I arrived. Soon after, social assistance enabled me to settle in Lachine. Two weeks later, someone told me about COVIQ, the Comité de vie de quartier DuffCourt, which was located close to my home.

I gave my name right away. I enjoyed the activities such as the Fête des Noirs (Black Festival), where I performed. It made me realize that I wasn’t going to lose my culture. At that time, I relied on weekly food aid from the agency. With social assistance alone, I could not make it through the month. The food aid offered by COVIQ helped me get back on my feet.

A few months later, COVIQ offered me a reception and operational support role. I must say that I was very touched. I didn’t expect it. When I arrived here as an immigrant, it took me a while to come to terms with my situation. I missed my family in Burundi. COVIQ helped me overcome solitude and depression. Because of my job, I no longer rely on social assistance, and I help my family.

Now, I can start to think about the future. As a mathematician, I hope to one day obtain the equivalent of my diploma and work for the Quebec Ministry of Education.”

Give immigrants a chance to integrate into society