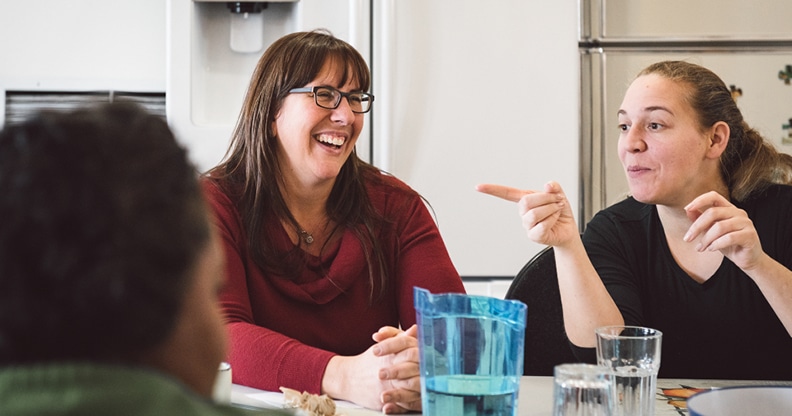 Vicky is a strong believer in the power of citizen action — and her actions speak for themselves.

Vicky Blanchard has always been someone who’s gotten involved, and her dedication has a clear and positive impact on Laval’s Saint-François neighbourhood. She’s a strong believer in the power of citizen action — and her actions speak for themselves.

Vicky had benefited from the support of the Maison de la Famille de Saint-François in the past, so she chose to get involved there, wanting to bring the Maison even more to the forefront in the community. The agency’s mission is to break the isolation felt by some families, to create a support network, to improve parent-child relationships, to facilitate childhood development, and to help parents thrive. The help they provide is a real blessing to many families in the region.

So Vicky helps out at the agency doing manual work, and she volunteers at special events. She also helps at the daycare centre, where she works with children who need individual support.

Over the years, her involvement has grown. She’s sat on the Board of Directors of the Maison de la Famille since 2011, and she’s also involved in projects such as La Voix des parents, an initiative that offers consultation sessions to target the community needs of Saint-François neighbourhood families, such as developing parks or installing pedestrian sidewalks, for example.

Vicky is also involved in a number of projects related to food security in the neighbourhood. She runs collective kitchens, hands out food to families in need, and cooks meals for the Coopérative de Solidarité St-François en Action. She also sits on the Comité des Cuisines collectives de Laval, for which she has been the official representative with the Regroupement des cuisines collectives du Québec since 2014.

A mother of six, Vicky is particularly keen on seeing local youth graduate from school. That’s why she’s also involved in the Comité consultatif des services aux élèves handicapés et aux élèves en difficulté d’adaptation ou d’apprentissage (“Advisory Committee on Services for Students with Disabilities and Students with Social Disorders or Learning Disabilities”). She works to improve access to services for parents of children with learning challenges of all kinds, to optimize kids’ integration in school, and to provide a positive impact on their quality of life and their self-esteem.

All these amazingly generous actions show that Vicky really is a model citizen. Her community involvement is a source of inspiration for everyone around her.

Vicky Blanchard is the proud recipient of the 2018 Solidaires Citizen Involvement.