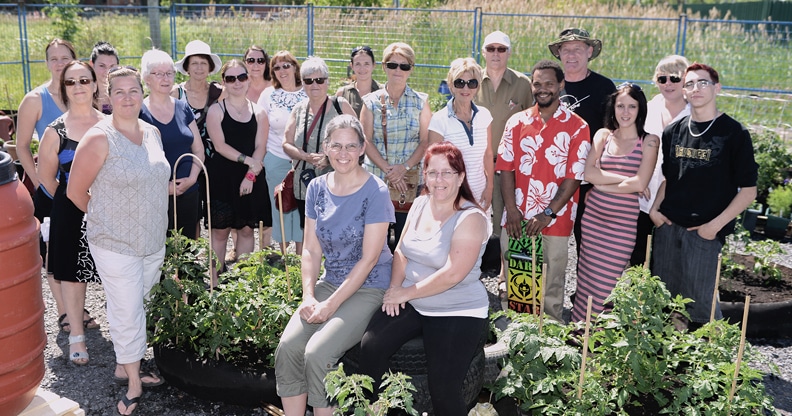 The benefits of the garden have already been great, and they continue to be felt throughout the community.

In 2015, eight agencies came together to create a community and intergenerational garden.

In 2015, the Centre de femmes du Haut-Richelieu women’s centre coordinated the coming together of eight agencies who wanted to create a cooperative community garden. The following year, with the added collaboration of new partners, the project grew to become an intergenerational community garden promoting sustainable development and healthy lifestyles.

The project’s initial aim was to rebuild the social fabric of a disadvantaged neighbourhood in the city of Saint-Jean-sur-Richelieu. The idea of creating a green space that would be accessible to all was intended to encourage residents to pool their energy and resources together and, in doing so, to help more vulnerable people in the sector to develop a sense of empowerment. Young and old alike could learn organic gardening together, and could grow their own vegetable garden, to produce high-quality, low-cost vegetables near their homes. In parallel to this project, workshops focussing on gardening, fitness, and cooking would be offered by expert volunteers.

In order to bring this large-scale project to reality, the Centre de femmes women’s centre first got local agencies working together. They in turn called on their own collaborators, to ultimately take on each different stage and aspect of the project: the design, funding, implementation, maintenance, community development, harvesting, and food processing.

Community cooperation for this project has reached an impressive scale. The development of the project brought together the efforts of the members of the women’s centre, volunteers from the Saint-Vincent-de-Paul Society of Saint-Jean, youth from the Maison du jeunes Le Dôme, and parents and children working with Mouvement SEM (a local charity whose focus is awareness about ensuring better childhoods for kids). The city was so enthused by the project that they decided to offer organizers a vacant lot where they could set up the community garden. Then the local MP provided equipment to the gardeners, and many other collaborators joined in as well, including tenants of HLM Gouin, the Agricultural Management and Technologies Department at Cégep de Saint-Jean-sur-Richelieu college, the L’Étoile social pediatrics Centre, Haut-Richelieu Alternative Justice, and numerous local businesses.

This great cooperative momentum has created community garden, of course, but the participants were also able to strengthen their social network while they improved their skills, and they now find themselves all the more motivated to empower themselves to act and get involved as citizens again in the future.

The benefits of the garden have already been great, and they continue to be felt throughout the community. Thanks to this collective community project, the Centre de femmes du Haut-Richelieu women’s centre has helped break the isolation of seniors, got young people involved, increased food self-sufficiency and the healthy living habits of residents, enhanced knowledge transfer between generations, and beautified the neighbourhood. And the benefits just keep on coming!