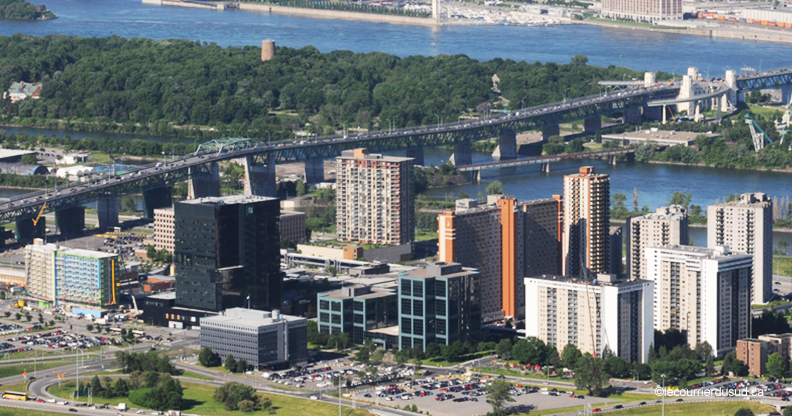 In 1657, Charles Le Moyne de Longueuil et de Châteauguay, a merchant from Ville-Marie (now Montreal), was granted a territory along the Saint Lawrence River. He named it Longueuil after a village where his mother was born in France.

In 1845, the parish municipality of Saint-Antoine de Longueuil is founded. Three years later, it became the village of Longueuil following its separation from the rural parish and its establishment as a distinct municipality. It became a small town in 1874 and a large city in 1920. During the 1960s, the territory of Longueuil was expanded with the annexation of Montreal-South (1961) and its fusion with the city of Jacques-Cartier (1969).

Due to its historical significance, the name Longueuil was retained for the new city at the time of its formation in 2002 by the fusion of the cities of Boucherville, Brossard, Saint-Hubert, Saint-Lambert, Saint-Bruno-de-Montarville, Greenfield Park and LeMoyne. However, in 2006, this amalgamation was partially revoked, and Boucherville, Brossard, Saint-Lambert, and Saint-Bruno-de-Montarville became distinct municipalities.[1]

The territory and its population

The agglomeration of Longueuil is a territory that presents many particularities, in terms of community dynamics, concentration of poverty and social problems. The realities in more underprivileged neighbourhoods such as LeMoyne or Sacré-Cœur in Vieux-Longueuil, Laflèche in Saint-Hubert, or in some sectors of Brossard or Boucherville, differ greatly.

The aging of the population is speeding up

Although in 2006, the demographic weight of people under the age of 15 was superior to that of seniors in most municipalities, 2011 saw a trend reversal. The proportion of seniors is now similar to that of young people in Longueuil (15%).

Of the 20,055 single-parent families living in the agglomeration, 13,140 reside in Longueuil. Their presence is particularly strong in the Vieux-Longueuil borough (8,040).

Half (51%) of the low-income population of the agglomeration live in Le Vieux-Longueuil (28,105 people). This borough has both the largest number and highest proportion of low-income individuals, that is 21% (agglomeration: 14%).

The proportions of toddlers and seniors facing poverty are particularly high: 25% and 21%, respectively.

More than half of the agglomeration’s recent immigrants have settled in Longueuil (8,905 out of 14,375). Of these, nearly three-quarters (6,375) live in the Vieux-Longueuil borough.

Vieux-Longueuil is the area with the largest number of low-income people in the Southern region of Greater Montreal.

The agglomeration houses many agencies that work with the most vulnerable populations. The Vieux-Longueuil borough alone has nearly two hundred local or regional community agencies, thus forming the most developed network within the territory. When it comes to consultation and mobilization, there are close to fifty places of consultation on the fight against poverty and social exclusion.

Since the early 2000s, the Vieux-Longueuil borough has been structured around seven neighbourhood round tables (TVQ) which bring together several community players whose goal is to improve the quality of life of local communities. The Corporation de développement communautaire de Longueuil (CDC), which includes close to 70 community agencies, ensures the implementation and animation of this agency).

Over the years, Centraide financially supported many agencies that help young people and families of the agglomeration.

Centraide’s investments in the territory

Centraide of Greater Montreal targets three key issues in the fight against poverty in Longueuil:

Centraide of Greater Montreal pays special attention to the interventions taking place in those neighborhoods most affected by these issues.

An example of initiatives in the territory

Beyond the quality of their actions which focus on durable solutions, all the agencies supported by Centraide of Greater Montreal are leaders in their communities and act as levers.

Greater Montreal residents with limited finances face particular barriers when it comes to housing. Given the very low vacancy rate in Montreal, available apartments of any size are becoming scarce. In many areas with high numbers of people who live on a low income, even fewer low-cost apartments are available.

The Coalition des organismes de l’agglomération de Longueuil pour le droit au logement, which includes the Comité logement de la Rive-Sud, conducted a large, unprecedented study on the living and housing conditions of 1,000 renter households of the agglomeration of Longueuil in order to better understand the needs and target their actions.

The agencies supported by Centraide