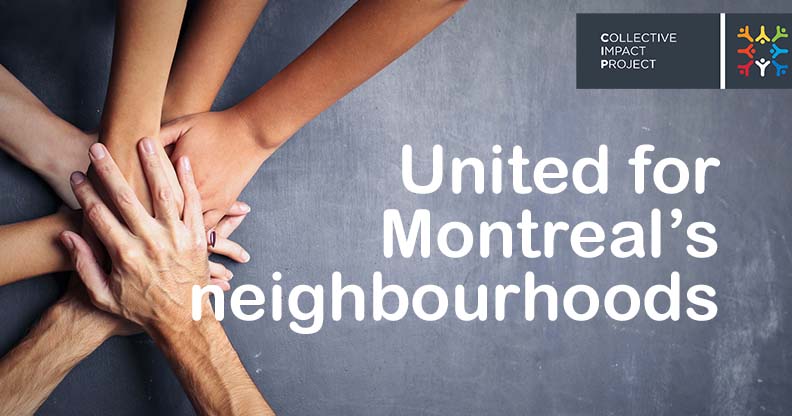 United in support of Montreal neighbourhoods

Montreal, April 27, 2022 — Phase Two of Centraide of Greater Montreal’s Collective Impact Project (CIP) is being launched with the support of eight philanthropic foundations as well as the Coalition montréalaise des Tables de quartier (CMTQ – Montreal’s neighbourhood round table coalition), the Ville de Montréal, and the Direction régionale de santé publique (regional public health department). This next phase will involve the expansion of the innovative project aiming to reduce poverty and social exclusion to all the neighbourhoods on the Island of Montreal.  It has been made possible through additional funding in the amount of $21.5 million over five years from the Lucie et André Chagnon Foundation, the Marcelle et Jean Coutu Foundation, the Foundation of Greater Montreal, the McConnell Foundation, the Molson Foundation, the Pathy Family Foundation, the Peacock Family Foundation, and the Mirella and Lino Saputo Foundation.

This second phase will make it possible to pursue ongoing initiatives in 17 neighbourhoods while inviting 15 more neighbourhoods to participate. The 32 Montreal neighbourhoods will be able to take part in this large-scale social transformation initiative that brings together partners from the community, institutional and philanthropic sectors.

The Collective Impact Project mobilizes resources to fight poverty and social exclusion in various places throughout the Island of Montreal in response to community-identified needs.

“The CIP approach has been shown to have a lasting impact on our communities,” said Claude Pinard, President and Executive Director of Centraide of Greater Montreal. “It aligns with my conviction that we need to take cooperation to the next level. As project operator, Centraide is excited to be launching this second phase, thanks to the support of its partners. It’s a great opportunity to give a boost to the struggle against poverty in our neighbourhoods, especially in this post-pandemic period of exacerbated inequalities,” Pinard noted.

There are 400,000 people living in poverty on the Island of Montreal, which is home to one in three low-income Quebecers. One in four children in Montreal comes from a disadvantaged family. The current inflation rate is making life harder for many Montrealers who are already having trouble meeting basic needs, such as housing and food. “The CIP represents a different approach to poverty reduction,” said CIP coordinator Rotem Ayalon. “Citizens and community groups play a leadership role at the neighbourhood level and determine their own priorities. The goal is to tackle the causes and not just the effects of poverty. There’s a small revolution happening in Montreal, and several cities have said they are inspired by the work we’ve been doing,” Ayalon noted.

One of the distinctive features of the CIP is that it relies on existing consultation and collaboration bodies that are rooted in the communities via the neighbourhood roundtables. It strengthens collaborative efforts in various Montreal areas, with the aim of improving living conditions—access to housing and food, for example.

“In Ville-Émard/Côte-Saint-Paul, community organizations that belong to the roundtable made a decision in concert with citizens to make food autonomy a priority,” said Assia Kada, General Coordinator of Concertation Ville-Émard/Côte-St-Paul and member of the CIP partners’ committee. “As a collective project, the CIP has made it possible to rally local stakeholders around the development of a local food system,” she added.

As the second phase of the project allows for many initiatives to be undertaken in Montreal, it represents a promising lever for broadening and deepening the impact of collective action on the fight against poverty and social exclusion at the regional level.

To learn more about the CIP and the projects that have been undertaken in Montreal neighbourhoods, see: pic.centraide.org/en

Centraide of Greater Montreal operates in the territories of Laval, Montreal and the South Shore. It provides regular support to a network of 350 agencies and collective projects on an annual basis. Centraide receives support from businesses, private, public and parapublic institutions as well as major trade unions. The money raised is invested locally to break the cycle of poverty and social exclusion. For more information, visit https://www.centraide-mtl.org/en.

About the Collective Impact Project (CIP)

Centraide of Greater Montreal has been coordinating the Collective Impact Project (CIP) since 2015. This project brings together partners from the community, institutional and philanthropic sectors around a common vision of changing the approach to supporting local collective struggles against poverty and systemic social exclusion. Taking the needs of local communities as the starting point, the stakeholders work together to decide what kinds of changes should be put in place in each community. Collective impact is an approach to solving specific social problems through collaborative cross-sector efforts, that was systematized in 2011 based on several North American experiences. For more information, see: pic.centraide.org/en.