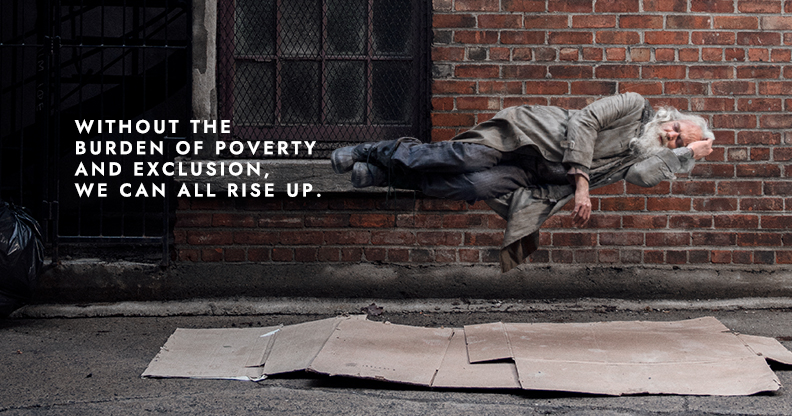 This spring, Centraide of Greater Montreal is launching a new advertising campaign full of emotion and hope. Through five scenes depicting the daily lives of vulnerable people, the new campaign’s message is clear: the burden of poverty and social exclusion can be hard to bear, but with the help of others, that burden can be lifted.

The centerpiece of this advertising campaign* is a one-minute video that takes a poetic and inspirational approach to highlight pressing social issues:

These five scenes reflect real situations experienced by people who receive help from workers and volunteers from community organizations in Greater Montreal. The scenes remind us that people experiencing poverty and social exclusion carry an enormous burden. But the hopeful video also shows that through donations that support the efforts of the community sector, we can collectively make a difference and help them carry that weight

The work of community agencies supported by Centraide, made possible by the generosity of partners and donors like you, is represented in the video by a woman who lends a compassionate hand and lifts some of the weight from the characters’ shoulders. In doing so, she allows them to rise up, illustrating Centraide of Greater Montreal’s new campaign slogan: “Without the burden of poverty and exclusion, we can all rise up.”

The campaign will be launched online, including social media, and on television.

Raising the issue of poverty

The idea behind this campaign is to shed light on issues that we often neglect, simply because we are used to being exposed to them. The goal is to create a collective awareness.

Following the health crisis, which heavily impacted the most vulnerable members of our community, inflation dealt another blow to the least fortunate households in the greater metropolitan area. These issues are heightened by the worsening shortage of affordable housing. Centraide and the agencies it supports are directly witnessing the population’s growing challenges and the urgent need to act.

In the months leading up to the launch of the organization’s 49th annual campaign, Centraide of Greater Montreal wants to raise public awareness of the issues of poverty and social exclusion. Ultimately, these issues affect us all. Together, we form a society, and supporting our social fabric fundamentally depends on mutual aid.

LET’S ALL LEND A HAND

As it approaches its 50th anniversary, Centraide of Greater Montreal has adopted a new slogan: ”Let’s all lend a hand.”The slogan is a call to action to all members of society, whether they be individuals, companies, institutions or foundations. This simple and direct slogan encourages everyone to help out and join the fight against poverty and social exclusion.